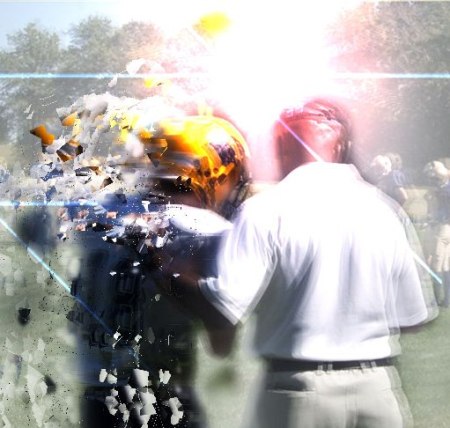 It’s your eighth day of football and your tenth day of grade nine.

You’re in the locker room. Everyone’s getting ready for practice. Your mouthguard is no longer attached to your helmet.  No mouthguard means you’re running laps. You don’t want to run laps.

You slink your way to the coach’s room. The coaches are meeting, speaking nonsensically.

“Let’s install Gooo principles today. We need to get our counter play in before next week. On ‘D’ we’ll put in Hawk formation, get the ‘Deebees’ learning their zone principles, linebackers flow and scrape — stress pursuit. We’ll script Chicago vs. Eagle, work trips into the package, see if the receivers know their waggle and motion.”

“You need something, John?”

“What happened to the one you had yesterday?”

“Do not lose this one. It costs the program money.”

You make it back to your locker relatively unscathed and head out to the practice field. The whistle blows and you’re told it’s time for Indy. Everyone seems to know where to go, except you. You wander coach to coach looking for some sign that you’re headed in the right direction.

“Who are you?” the scary coach asks.

You stand there dumbfounded — your name is printed on your helmet on a piece of tape.

“Coach, he’s supposed to go with Deebees,” yells coach Adams. Or was it Andrews? You like him.

You start running to another group because you notice everyone always runs on the football field, for fear of more running.

You turn your head. The scary coach is staring you down.

“Debees are in the red zone.”

Luckily, he points to a group way across the field giving you a well-needed clue. You stop and take a few steps to change direction.

“Niner! Unless you want laps for the whole team I suggest you start running!”

And running is what you do. You get to the Deebee group.

“John, where you been man?”

“I was just over there.”

“You missed Sack Rat. Ask a teammate or me after practice. We’re on to one on ones”

You jump in line and the anxiety creeps in as you await your turn.

“Six by one inside shade. We’re in man. Eyes to hips and give him cushion.”

You move to your left. You’re not sure if you’re supposed to, you just know that what you’re doing isn’t right. Coach grabs you by the shoulder pads.

“Six yards off the line of scrimmage, one yard inside,” he says, as he moves you, “get in your stance. Chin over toes, hips down. Okay gentlemen, let’s get a good rep.”

The play goes off. The receiver drops the ball in front of you. The coach applauds your effort. You’re not sure what you did right. The whistle blows.

A new coach pulls you aside. “John, we’re going to have you play Gunner. You’re on the outside and you have contain. Just keep everything inside of you, attack the returner’s outside shoulder. You got that?”

You nod your head.

You run out to everyone else. “John, wrong side, you’re on punt, that’s return.”

You run the other way. You seem to be in the right spot now.

“Get further outside, John,” yells coach, waving his hands.

Suddenly the ball is snapped. Someone kicks it. You hit the person in front of you because that’s what you think you’re supposed to do in football when you’re not running.

“John, you’re supposed to cover. I thought you said you got this?”

You don’t ‘got’ this and you don’t know what to say.

“Coach,” says another coach. “I don’t think John knows what a punt is.”

AUTHOR BIO: Andrew teaches English and Film at SRSS in the province of Manitoba, Canada. He’s an award-winning filmmaker, having produced short films and several broadcast documentaries. Andrew has also worked as a freelance creative consultant, advising companies on marketing strategies and projects. Currently, and into the near future, Andrew’s work is examining education and society's relationship with technology, delving into the world of both science fiction and non-fiction.

Published in Issue 85 Jun 2020
More in this category: Something New by Morgan Horst »
back to top
Realizzazione CMS